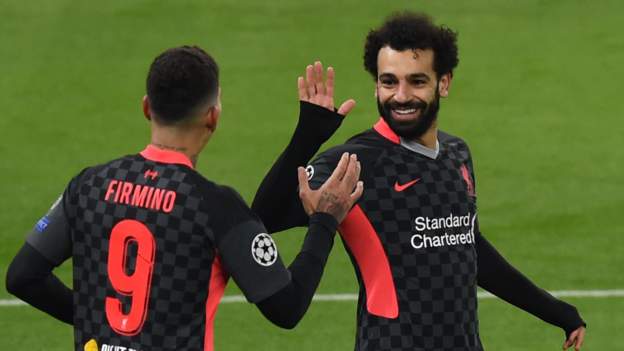 Liverpool boss Jurgen Klopp says his side defied many people’s expectations with their first-leg victory over RB Leipzig in the last 16 of the Champions League.

Mohamed Salah and Sadio Mane struck in the space of five minutes near the start of the second half in an away leg played in Budapest’s Puskas Arena because of Covid-19 restrictions.

It came after the Reds had fallen to three straight defeats in the Premier League – results that have led Klopp to concede defeat in their defence of the English top-flight title.

But Tuesday’s display was far more like the dominant side of last season, with their greater experience and quality ultimately telling against an error-prone German side.

“A lot of people probably expected us to slip again because of the situation, and the boys didn’t and I’m really happy about that,” Klopp told BT Sport.

“It was the game we wanted, the game we needed. Leipzig can be a real monster – they overrun teams, they are really physical and tonight we controlled them in an exceptional way.

“For two years we’ve been really good and this year we have some problems. It’s normal that the talks start – I have no problem with that. But the boys showed what they can do.”

Liverpool had largely dominated possession and created the better chances before the break but two defensive errors and two neat finishes swung the game and the tie their way.

Salah showed superb awareness to quickly latch on to a loose back-pass before finishing neatly.

Mane was then equally alert to take advantage of a fluffed attempted clearance from Nordi Mukiele to charge through and side-foot past Peter Gulacsi.

However, they had been fortunate not to fall behind inside five minutes when Dani Olmo’s header from an Angelino cross struck the base of the post.

Having managed the game well after going 2-0 up, Klopp’s side will defend their advantage at Anfield on 10 March, when they will be firm favourites to go one round further than they managed last season.

In the gap between their final group game and this, Liverpool’s season has imploded somewhat. Their long unbeaten domestic home record has come to an end, as has their challenge for this season’s FA Cup, and their last three league matches have ended in defeat – leading Klopp to wave the white flag on their title defence.

Tuesday night, though, was a much-needed reminder of the qualities that drove them to that league win and the Champions League trophy the season before it.

Having survived Olmo’s early header, they grew into the game, wresting control away from Leipzig before shellshocking opponents who reached the semi-finals of this competition last year, saw off Manchester United in this season’s group stage and currently sit second in the Bundesliga.

The game was billed as master versus apprentice, one of Germany’s finest managerial exports of the modern era in Klopp up against the country’s – possibly the continent’s – brightest young thing in Julian Nagelsmann.

It showcased a shared DNA between two sides intent on playing on the front foot in enemy territory. Players charged forward when they had the ball and harried in a high press when they did not. Fire fought with fire.

It made for a frenetic and fascinating spectacle, which tested even the most lauded of defenders and forced them into errors, chief among them Bayern Munich-bound Dayot Upamecano, who repeatedly gave the ball away as Mane and Salah buzzed around him.

Despite having the better of the first half, applying the more consistent pressure and producing the greater number of chances, Klopp’s side were unable to get their noses in front.

In the space of 30 seconds, Salah saw an effort blocked by Gulacsi after he had darted in behind the Leipzig defence before Roberto Firmino fired into the side-netting from an angle.

Mane headed over another opportunity, Robertson was inches away from the beating the back-peddling Gulacsi with an effort from near halfway and Firmino had the ball in the net but only after the ball had gone out of play before being hooked back into the middle.

However, these were all forgotten before the hour mark was reached as the German side snapped and Salah and Mane took advantage.

Leipzig never fully recovered, their only real chance of salvaging anything to take to Merseyside being a shot from an angle that substitute Hwang Hee-chan pulled wide in added time.

It represents a big foot forward towards the quarter-finals for the Reds and a first step on the road to potentially reigniting their flagging season.

Klopp’s side leads the way for clean sheets – the stats

Player of the match