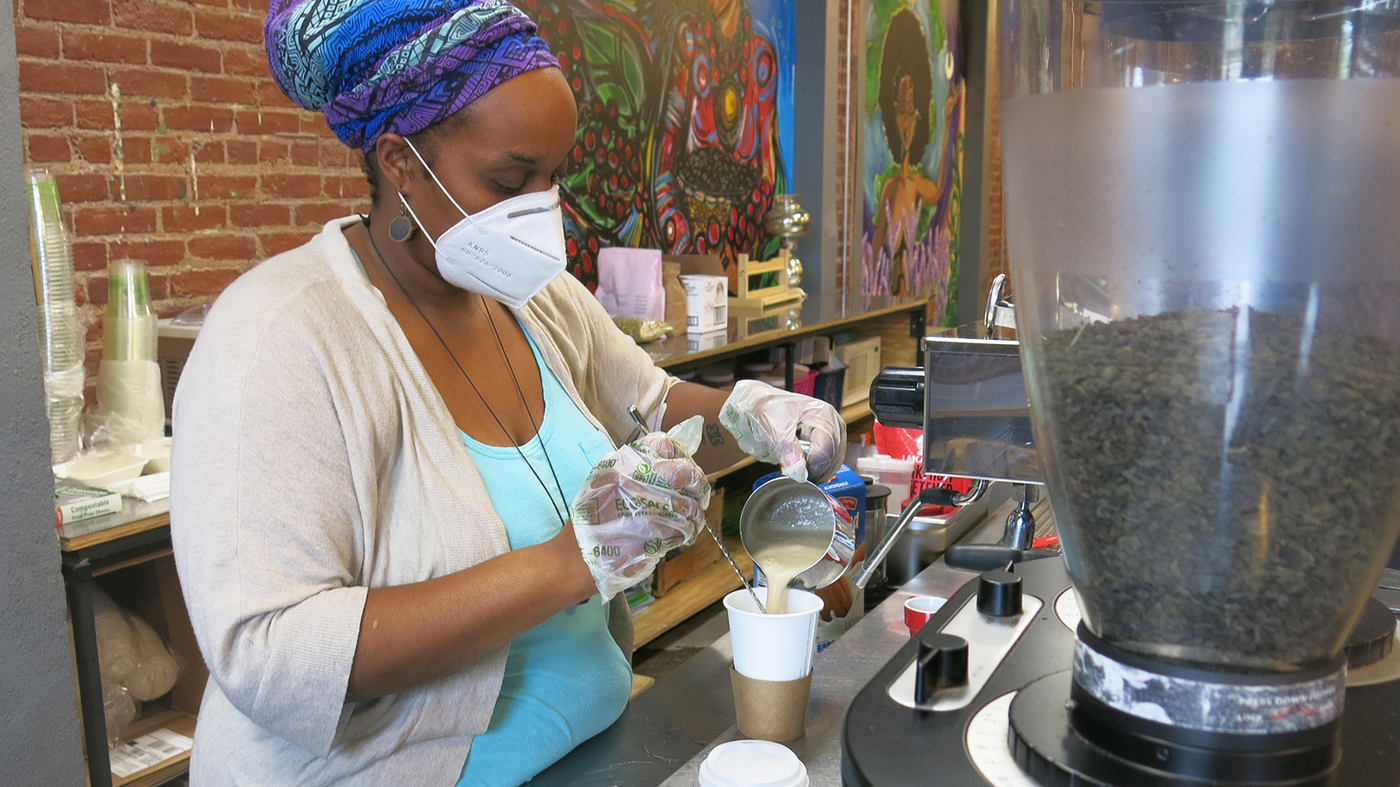 Nika Cotton opened her own shop, Soulcentritea, just weeks ago. When public schools shut down in the spring, Cotton had no one to watch her young children who are 8 and 10. So she quit her job in social work — and lost her health insurance — in order to start her own business. 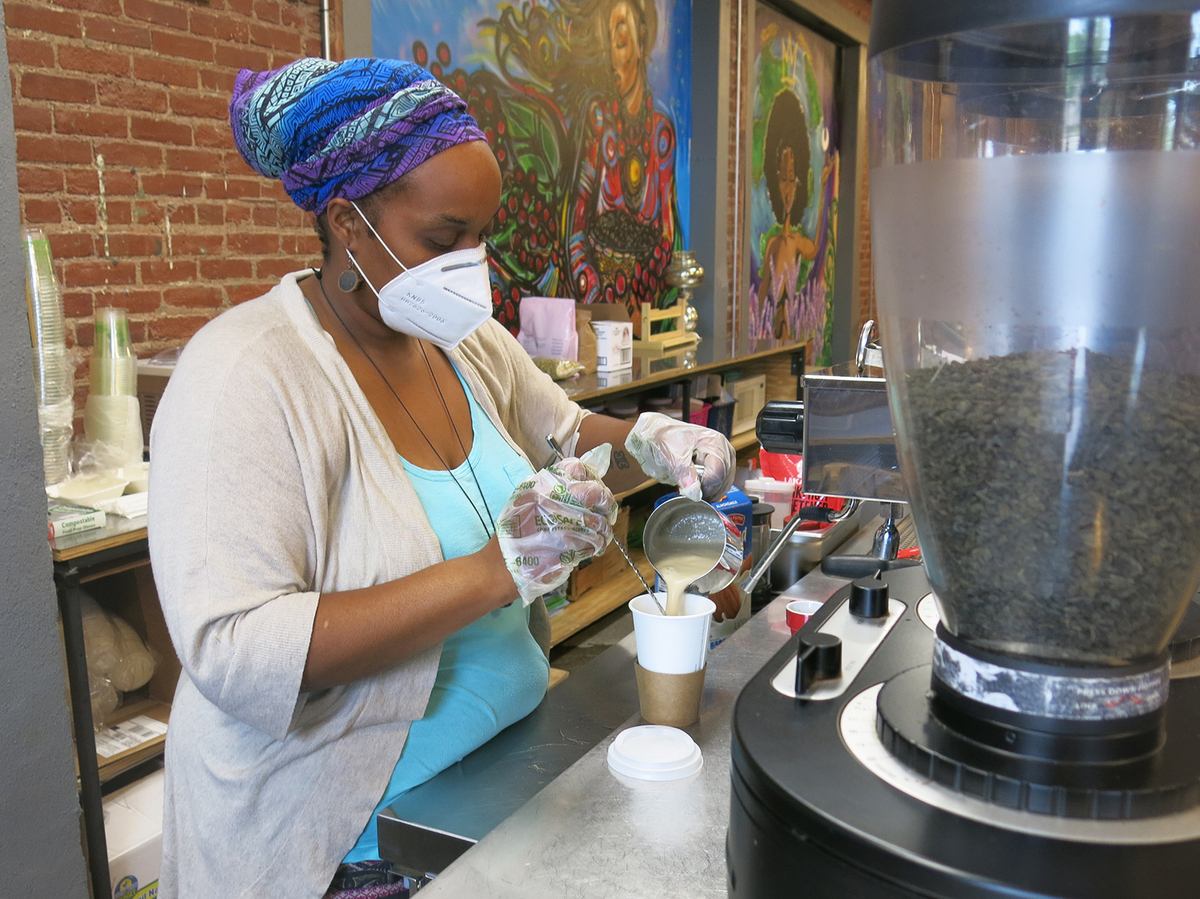 Nika Cotton opened her own shop, Soulcentritea, just weeks ago. When public schools shut down in the spring, Cotton had no one to watch her young children who are 8 and 10. So she quit her job in social work — and lost her health insurance — in order to start her own business.

Despite strong opposition from Republicans and rural voters, Missouri on Tuesday joined 37 states and the District of Columbia in expanding its Medicaid program.

Voters in Missouri approved Amendment 2, creating a state constitutional amendment that will open Medicaid eligibility to include healthy adults starting on July 1, 2021.

Missouri joins five other mostly conservative states which have passed Medicaid expansion via ballot initiatives, most recently Oklahoma which voted in the measure on June 30. Most of the remaining 12 states that haven’t expanded Medicaid are Republican-leaning states in the South.

Nika Cotton, the owner of Soulcentricitea, a newly opened tea shop in Kansas City, Missouri, woke to the news on Wednesday morning. Cotton, whose children are 8 and 10, says she will qualify for health care coverage under expansion.

“It takes a lot of stress off of my shoulders with having to think about how I’m going to take care of myself, how I’m going to be able to go and see a doctor and get the health care I need while I’m starting my business,” Cotton says.

Medicaid expansion, which states have the option of adopting as part of the Affordable Care Act, opens eligibility in the program to individuals and families with incomes up to 138% of the federal poverty level. The federal government covers 90% of expansion costs.

Researchers from Washington University in Saint Louis, estimated in 2019 that around 230,000 people in Missouri would enroll for Medicaid if it were expanded. As of 2018, 9.3% of Missourians were uninsured. The study also showed expansion would save the state an estimated $39 million dollars a year largely by eliminating the need for other state health spending.

Missouri’s adoption of expansion follows a trend of increasing support in largely Republican states, according to health policy expert Rachel Nuzum of the Commonwealth Fund.

“What we’ve seen in our surveys over the years is when you take the labels off of the policies, when you take the Affordable Care Act label off, when you take Medicaid expansion off, and just start asking people whether or not you think low income families should have access to Medicaid coverage, the support is overwhelming,” Nuzum says.

Support for expansion came largely from voters in and around the urban centers of Kansas City, Saint Louis, Springfield and Columbia. Voters in Kansas City, Mo., for example, approved the measure by 87.6%.

Amendment 2 was rejected overwhelmingly by conservative voters in the mostly rural parts of the state that have the highest uninsured and poverty rates.

Voters in McDonald, Morgan and Scotland counties, which have the three highest uninsured rates in the state, rejected the measure by margins of nearly two-to-one or greater.

Expansion opponents warned that high enrollment in the program could lead to the state’s 10% share of the costs to become a significant burden for the state, especially when state revenues are down.

“When state revenues fall, it begs the question, how are you going to pay for this?” said Ryan Johnson, senior adviser for United for Missouri, a conservative policy advocacy organization, in late July.

“We’re concerned that they are going to have to raid public education, and that’s a disservice to the kiddos who hope to go back to school this fall, the teachers, the administrators and everyone involved in the public education system.”

Health care experts agree that the economic effects of the pandemic, including high unemployment and lower state revenue, could strain the capacity of state Medicaid programs.

However, health care advocates argue that expansion benefits individuals and families who are struggling as a result of the pandemic, and the influx of federal dollars and the jobs that result from expansion could help the economy.

“If we’re worried about the economy and we’re worried about people working, Medicaid expansion is actually a way to encourage people to work and not have that worry they’re going to lose health insurance for themselves or their families,” says Ryan Barker, vice president of strategic initiatives for Missouri Foundation for Health.

Medicaid expansion has been fiercely resisted by Republican lawmakers and was placed on the ballot as the result of a petition.

Expansion advocates enlisted the Fairness Project, a Washington DC-based campaigning organization, in developing and executing their campaign strategy. The Fairness Project has been involved in successful Medicaid expansion campaigns in other mostly conservative states, including Maine, Utah, Idaho, Nebraska and Oklahoma.

The YES on 2 campaign was supported by a wide range of interests, including the Missouri Chamber of Commerce, the Missouri Hospital Association, the NAACP, the AFL-CIO and the AARP, among other groups.

The coalition forged some unlikely alliances, including Planned Parenthood supporters and Catholic Charities of St. Louis, which is operated by the Archdiocese of St. Louis.

Missouri YES on 2 campaign material made almost no mention of the Affordable Care Act, which has been unpopular in Missouri, and some of its flyers didn’t even use the words “Medicaid expansion.”

“I think there’s still a lot of work to do to push back against the hundreds of millions of dollars, the public messages coming from as high as the White House, that there’s something wrong with the Affordable Care Act,” Schleifer says.

The flyer, which featured a man in a medical mask emblazoned with the Mexican flag, read “Amendment 2 means Illegal Immigrants Flooding Missouri Hospitals…While We Pay For It!”

The No On 2 in August campaign did not respond to requests for comment on the flyer.

Between serving customers on a busy morning on Wednesday, shop owner Nika Cotton said that her excitement about expansion was only slightly diminished by the fact that it won’t take effect for almost a year.

“It’s better late than never,” says Cotton. “The fact that it’s coming is better than nothing.”

This story was produced as a collaboration between KCUR, NPR and Kaiser Health News.