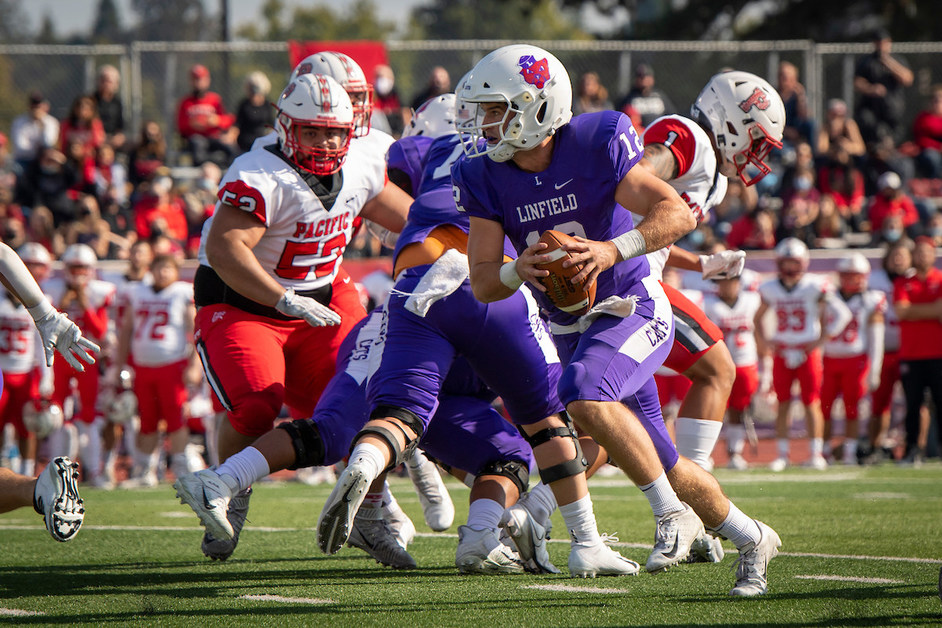 “The Streak” began in 1956 and is the longest in the history of college football in any division or at any level. Linfield completed its 64th winning season in 2019 but had its 2020 season cancelled because to the pandemic.

Linfield remains at the top of the Division III Northwest Conference. The Wildcats entered this week ranked No. 7 in the latest D3football.com Top 25 and No. 6 in the latest American Football Coaches Association (AFCA) poll.

“The Streak epitomizes Linfield’s commitment to excellence and hard work,” Linfield Director of Athletics Garry Killgore said. “Over decades now, the Wildcat football program has consistently emphasized core values that are reflective of what we want our students to leave Linfield with – the ability to set goals and strive to achieve them; to overcome adversity; to take on significant challenges in life; and to be resilient.”

Six members of the 1956 team were honored at halftime of the game Saturday. During the 1956 season, the Wildcats went 6-1-2 after posting a 3-6 season the previous year. Since then, the Wildcats have never finished with a losing record.

An oral history project featuring The Streak has been organized by Linfield’s Archives and Special Collections. The collection features videos, photos and transcripts from interviews with members of the 1956 football team.

“As an archive, our mission is to preserve stories as well as objects,” said Rich Schmidt, director of archives and resource sharing at Linfield. “These first-person recollections are priceless, both as primary source materials and as a preservation of legacy. We thought it was important to look at The Streak through the eyes of these players and give them a chance to reflect on what it has meant to watch The Streak become what it has become.”

The Streak digital archive is available at linfield.edu/thestreak.

About Linfield University Linfield University is an independent, nonprofit university with campuses in McMinnville and Portland, Oregon. Since 1858, Linfield has connected a traditional liberal arts experience with practical education through 57 majors, including wine studies, sport management and nursing. For three years running, U.S. News & World Report magazine has named Linfield one of the top liberal arts colleges in the nation when it comes to social mobility. Thirty-two percent of Linfield students are first-generation college students, and more than one-third are U.S. students of color. Linfield competes in the NCAA Division III Northwest Conference. Learn more at www.linfield.edu.