Maria Hernandez (top row, second from left) and her extended family live together in Los Angeles. When she was diagnosed with the coronavirus, she self-isolated in an upstairs bedroom. 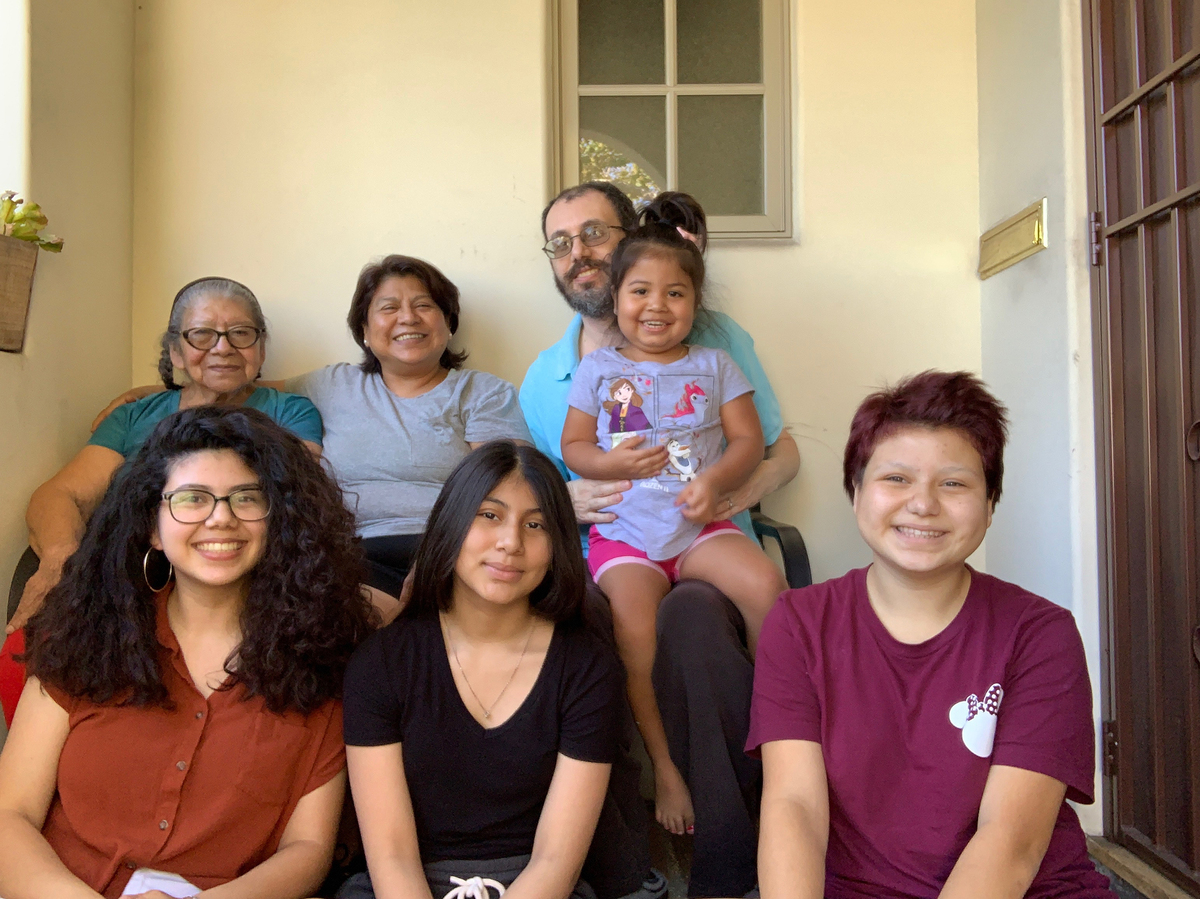 Maria Hernandez (top row, second from left) and her extended family live together in Los Angeles. When she was diagnosed with the coronavirus, she self-isolated in an upstairs bedroom.

Maria Hernandez shares a four-bedroom house in Los Angeles with her husband, Michael Josephy, three of her daughters and her 85-year-old mother. Her 3-year-old granddaughter often stays there, too.

To Hernandez, family is everything. Family members are close. So when the pandemic hit, she was worried about her family contracting the coronavirus.

“It was a challenge mostly to think about my mother,” she said.

Hernandez, 50, works night shifts at Ralphs, a grocery store chain in California. She’d been careful while at work and at home, changing out of her clothes every time she got home and sanitizing her house constantly.

But one day in late May, she felt a wave of exhaustion hit her. The next day, it got worse.

“My husband took me to the emergency room because my fever was up to 102. I had trouble breathing. I felt dizzy. I felt nauseous,” she said.

Hernandez tested positive for the coronavirus. The next several weeks were a bit of a daze, she recalled. She isolated herself in the master bedroom upstairs, while her family left food outside the door.

In total, she stayed inside the bedroom for about seven weeks.

“It was an experience that I don’t wish upon anybody. Because this thing instead of getting you guys closer to your family, it’s getting us far apart,” she said. “It’s very hard.”

Her family members, including her mom, thankfully didn’t get COVID-19. But Hernandez said she still worries about bringing the virus back home now that she’s recovered and gone back to work. She said many of her day-to-day interactions with her mother have changed since the start of the pandemic.

“I had to stop doing what I did, giving her a hug. We Latinos are used to that, giving them a hug, a kiss on the cheek. You know, letting them know we are back, we’re secure, we’re home,” she said.

According to an analysis by the Pew Research Center, Asian, Hispanic and Black people are more likely to live in multigenerational households than white residents in the United States. But the trend has been growing across racial groups over the past decade, due to economic factors, including the cost of housing.

In California, Latinos have been disproportionately affected by the pandemic. While making up 39% of the state’s population, Latino Californians account for 59% of the cases and 47% of deaths from COVID-19.

One reason is that many workers don’t have the luxury to work from home, said Dr. Kirsten Bibbins-Domingo, professor and chair of the Department of Epidemiology and Biostatistics at the University of California, San Francisco.

“We have, throughout the pandemic, just seen in the hospitals how devastating this is for our Latinx community,” she said.

Workers then can bring the virus back home to their families. That’s a challenge in multigenerational households when a younger person is living with an older person who’s at risk for serious complications from COVID-19, Bibbins-Domingo said.

“When we start to see families together in the hospital, we know that this late into the pandemic, that we’re really not doing everything we could to keep our families safe,” she said.

Bibbins-Domingo, 54, lives in a multigenerational household herself, with her husband, 84-year-old mother and her adult son. She said there are benefits to these living arrangements for both economic and social reasons.

“Our seniors are often isolated. Multigenerational households offer that built-in way of making sure that people are still living in community,” she said. “But it does pose an additional challenge as our younger people are out working.”

A housing and health crisis

Bibbins-Domingo said it’s especially hard for multigenerational families who live in households where it’s hard to isolate in a separate bedroom.

“I think where we’re seeing high patterns of transmission is when it’s further compounded by more dense living situations,” she said.

Dr. Don Garcia, medical director of Clínica Romero, which runs two clinics in Los Angeles serving a predominantly immigrant and Latino population, said in tough housing markets such as Southern California, many of his patients live in tight quarters.

“They’re put in a housing situation or living space situation that causes the transmission infection to progress forward,” he said.

He told the story of one patient early on in the pandemic. A woman in her 20s shared a one-bedroom apartment with three generations when she got exposed.

“So now she was bringing an infection to her sister, of course, to her parents and her young infant and young child,” Garcia said.

For Hernandez, she had space in her house to isolate herself from other family members, including her mother, when she needed to do so. But she said life is much different now with the pandemic. She no longer does things with her mother like she used to do, such as having breakfast and lunch together.

“Everything was together,” she said. “It has changed our lives completely.”

Despite the stress of keeping her mother and daughters safe, she said she wouldn’t have it any other way. She’s able to watch over her mother, especially in the time of the pandemic.

“It’s better for them,” Hernandez said. “They don’t feel like they’re alone.”

Do You Actually Have to Wear a Mask Outside?